A face suddenly appeared in my mind. I took out my sketchbook and started drawing. I wasn’t sure how the sketch would turn out but once completed, I could feel that it was telling me a story about strong women, particularly from the East.

I was excited to start painting it.

Inspiration comes from many things and mine came from Leonardo Da Vinci, a brilliant artist with a curious mind, who among many things was also a scientist, engineer, and a keen observer of the phenomenon of nature.

Then out of the blue, I uttered “The French may have the Mona Lisa, but we Malaysians have the Mana Lina”.

‘Mana’ in the Malaysian language means where, and ‘Lina’ is a person’s name, which coincidently is the same as mine.

And that’s how Mana Lina was born.

An artist converses with a painting differently, and we carry out dialogues with them. That’s when sometimes inspiration or messages from the unknown comes to us, hence giving the painting a more deeper meaning.

This painting is the first painting I created for the Mana Lina series. Yes, I will be creating other paintings as a continuation of the first one, where each painting has its individual story to tell.

The Mana Lina (Part 1) depicts the strength and determination of the woman while also showing how she has acquired confidence through wisdom over time.

Sitting straight, always smiling at the viewer, with her long and flowing hair, and covering up part of her dress coloured dress is a green shawl suggesting her connectedness with the Earth. The jewellery on her dress represents three crowns that symbolize the three stages of human life: the woman as a maiden, a mother and a crone. 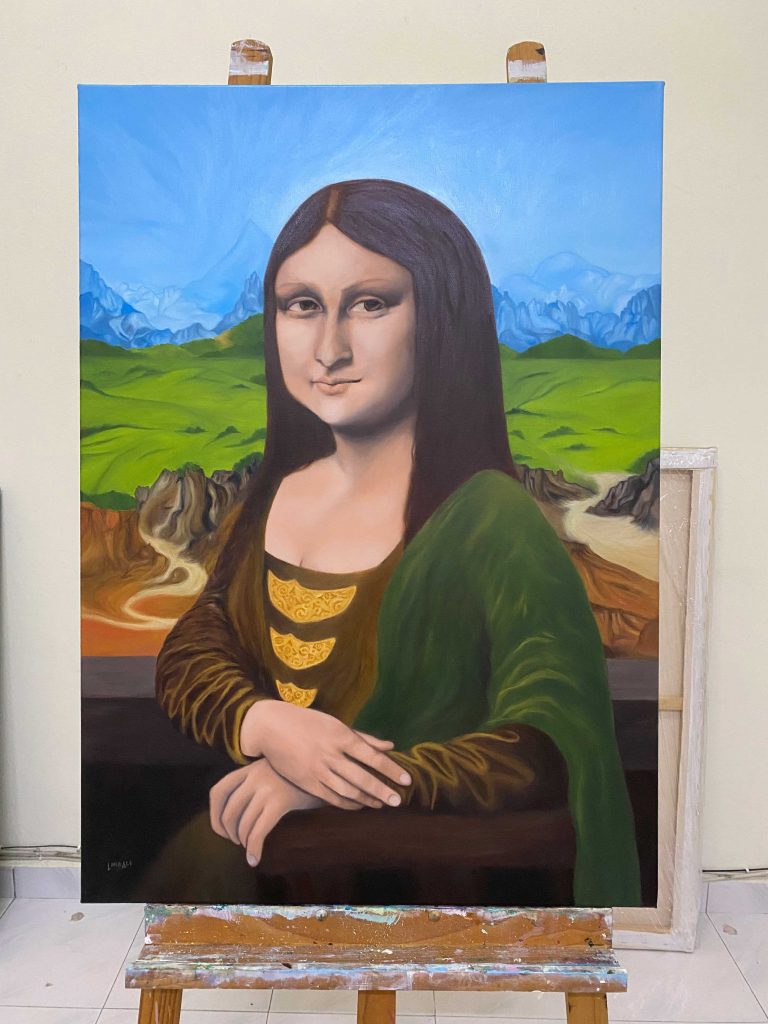 The background was done in a way that creates a sense of belonging to both fertile and barren Earth, representing her familiarity with both periods of ease and hardship that characterize life. She is content with herself and this is emphasized by the fact that she is surrounded by conditions of natural ease and hardship.

This painting represents a woman who has attained enlightenment through her life experiences because she appears to be in complete harmony with herself and her environment, reflecting the women who have led the development of early civilizations in the East.

Adding layers upon layers, and also having to walk around the painting, looking at it from different angles, many times, there was a sense of ‘welcoming’ every time I passed by or entered my studio. And I often lost track of time, and worked on the painting continuously till wee hours in the morning. 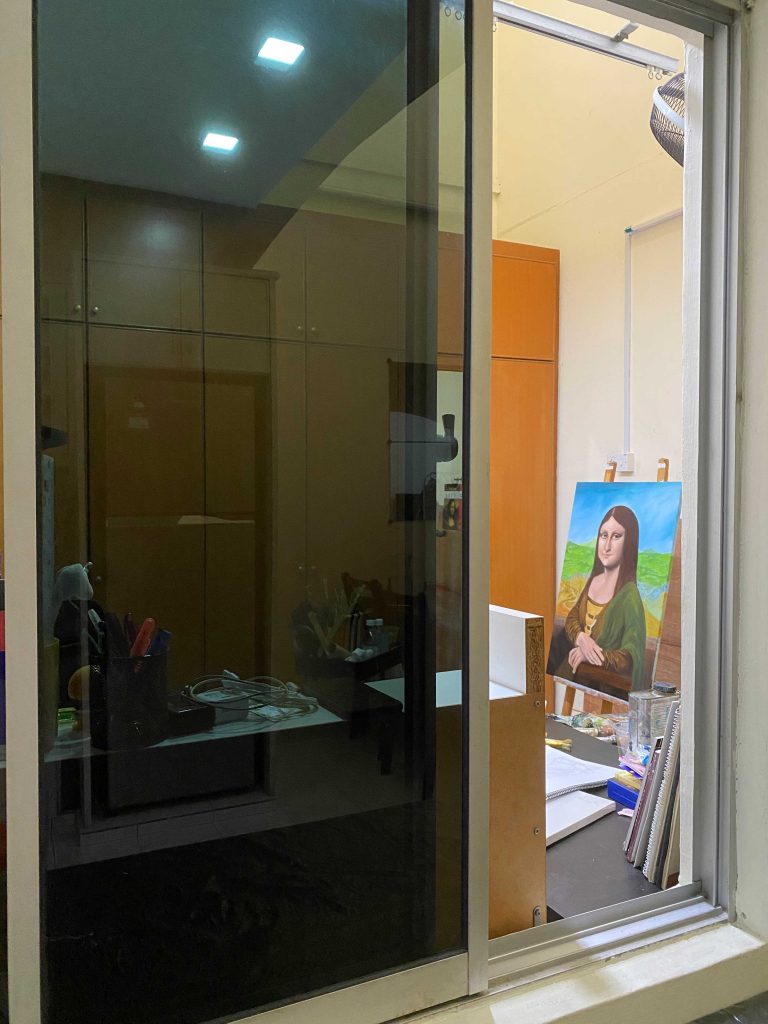 Most days when I paint, I prefer the quietness of sounds, although it’s never always quite in the heart and mind. On some days, I would put on my audiobook, or turn on music like the ‘Tubular Bells’ and listen to my favourite songs from the 70s – 90s.

On one occasion, I took the unfinished painting out with me on a holiday trip, taking pictures with her even when I went to the spa. We both really had fun there! 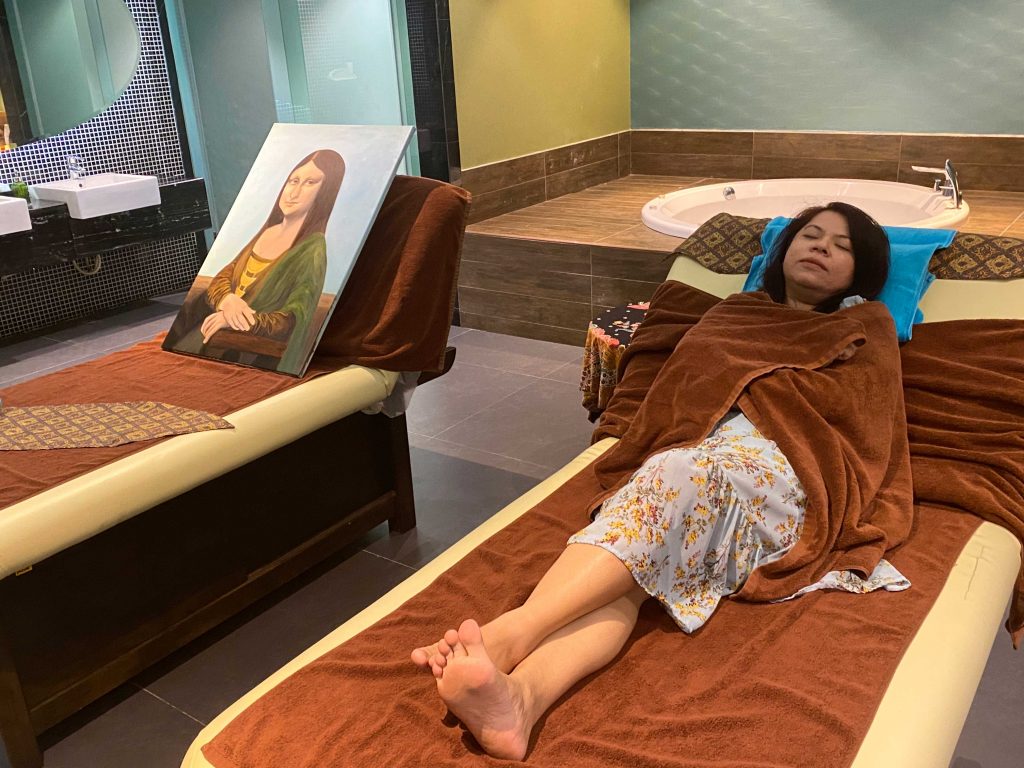 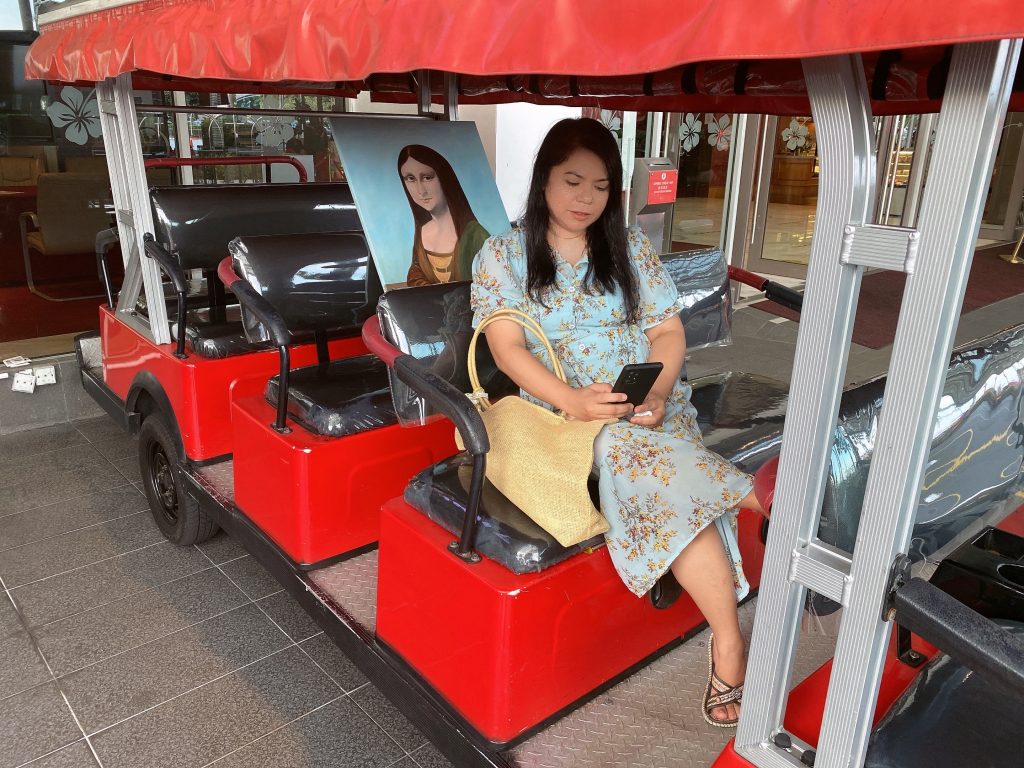 Where can you find Mana Lina

The Mana Lina will be making her appearance at the Asia Art Show charity dinner on 26th August 2022. A limited edition of premium quality prints will also be made available for the public during that time.

Apart from that, a set of Mana Lina’s very cool NFT collection will also be introduced as well.

Yes, the Mana Lina can be ‘mana-mana’ (meaning anywhere), and everywhere too!

I often wonder what goes on in Leonardo’s mind when he paints.

Apart from that, I was also intrigued by his curious and observant attitude, his teachings on perspectives, using light and shadows to create certain effects, as well combining arts and science in his works.

With that thought in mind, I experimented with the idea of not just making the eyes in the Mana Lina follow us around like in Leonardo’s Mona Lisa, but also using his teachings to make Mana Lina’s whole body seemingly face the viewer from any angle it is viewed as well. 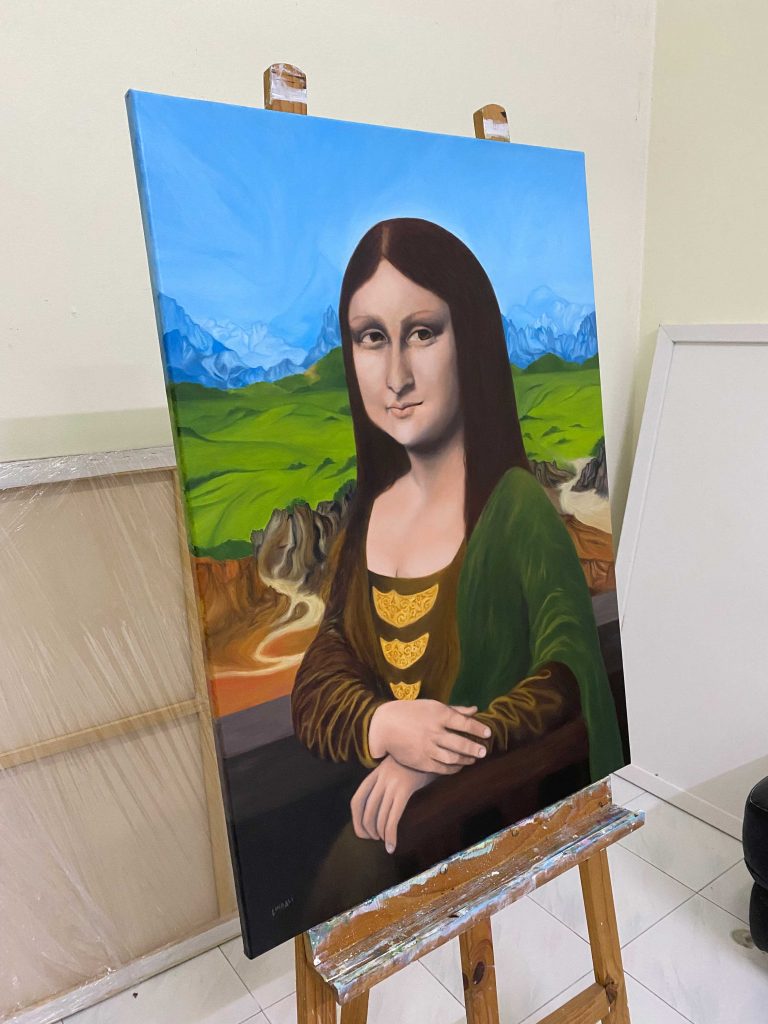 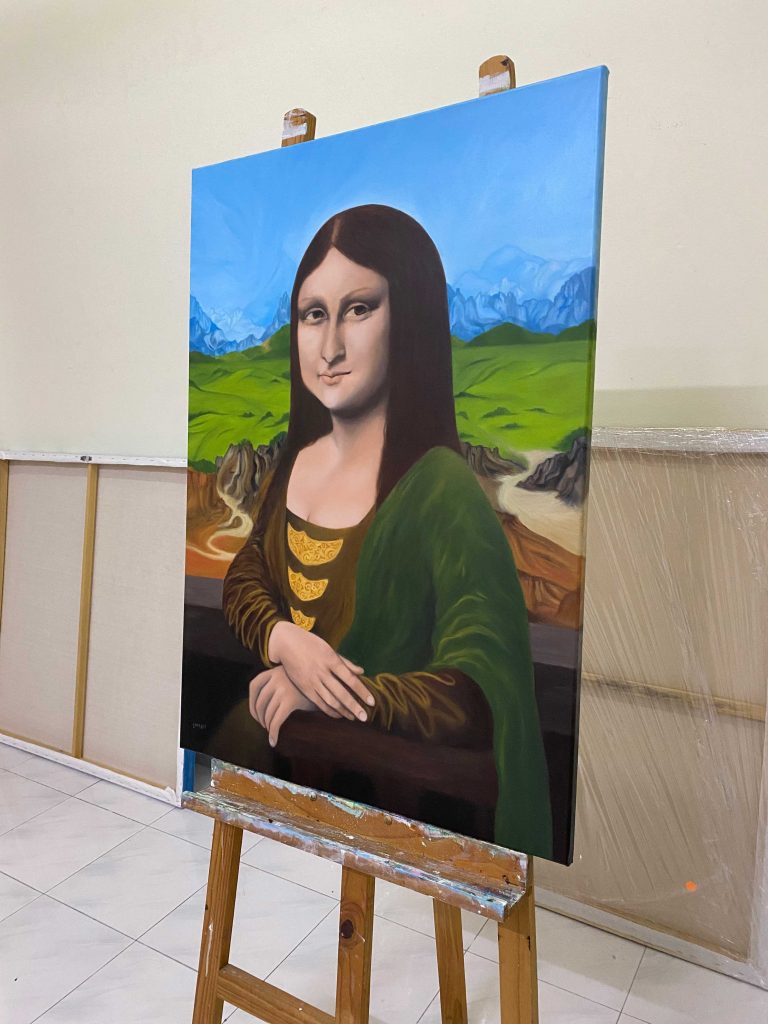 A closed door always opens another…

Whereupon by Leonardo’s death closed the door upon his exploration of the state of human knowledge during the Renaissance, the Age of Enlightenment, in the Western Traditions; the Mana Lina, is an evocative work that opens a new door and begins a series of painting with a question that explores the hidden wisdom and mysteries of the older Oriental Traditions which lies deeply buried within the history of our region.

While the Renaissance period swept over Europe during the 15th and 16th centuries, beginning in the Province of Florence, Italy, where Leonardo Da Vinci, widely regarded as the Renaissance Man, lived for most of his life, an Age of Enlightenment had started earlier in South East Asia.

In the 12th century, Angkor Wat was a metropolis the size of the present London with a population of close to one million. Irrigation channels fueled the economy of Angkor Wat with magnificent buildings and systematic roads and residential areas attesting to the progress of the Khmer Kingdom.

King Jayavarman VII is credited with building most of the metropolis but it was his two consorts Queen Indradevi and Queen Jayarajadevi who established the culture of health, knowledge, spirituality and enlightenment for the people.

The Majapahit empire originated from the union between Ken Dedes, an alluring strategist and wife of a regional governor and Ken Arok who, according to the Pararaton, a record of the times, was fathered by Brahma, producing the Singasari Empire which grew into the Majapahit Empire in the 13th century.

When the Burmese tried to invade the Ayutthaya Dynasty in 16th century Siam, Princess Suriyothai (whose name means “dawn”) rose to the occasion and bravely sacrificed her life in defence of her husband, King Maha Chakkraphat during the Burmese-Siamese War.

Prominent women in other Empires and Kingdoms throughout South East Asia played key roles in the development of the region into what it is now.

“When inspiration comes, embrace it.

It will lead you across time and open up the door to wisdom and knowledge.

For the universe has so much to teach us, if only we choose to look and listen to the signs”.